Catégorie : Celebrities on the French Riviera 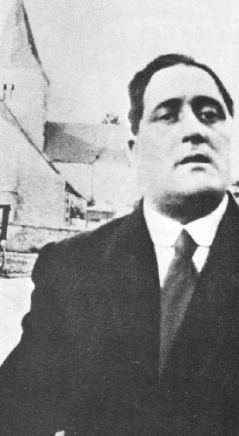 Guglielmo, Alberto, Wladimiro, Allessandro, Apollinaro de Kostrowitzky who will choose his gallicized first names as pen name, led an agitated youth together with his mother, an unpredictable and impecunious Baltic.
He lived from the age of seven to the age of nineteen on the Riviera.
He was registered at the brothers of the Christian Schools in the school Saint Charles of Monaco between 1888 and 1895, he continued his studies in the school Stanislas of Cannes in 1896 and went to the secondary school of Nice in 1897 where he was taught by Georges Doublet. He failed his secondary school diploma in July, 1897. He had different jobs, He traveled, he wrote and settled in Paris, but Nice remained his place of choice where he liked to go back.
In Hérésiarque and company ( 1910 ), he evoked the pilgrimage to Laghetand the commemorative plaques which decorate the sanctuary: " Gallery rich of unknown persons only, this convent of Laghet, and mysterious. The amazed and meticulous clumsiness of primitive art which reigns here has somewhat to touch even those who have no faith. There are there pictures of any kinds, the only portrait has there no place. All the sendings are exposed for eternity. As long as the painting commemorates a miracle due to the intervention of Our Lady de Laghet. All the possible accidents, the fatal diseases, the deep pains, all the human miseries are depicted there artlessly, devoutly, unsuspiciously ".
Apollinaire, back in Nice on September 3, 1914, settled down in the 26 rue Cotta, currently avenue Maréchal Foch. A few days later, in an inn of the old town Da Bouttau, he met Louise de Coligny-Châtillon with whom he fell fervently in love and who he called Lou in his poems. Pushed away and broke, he enlisted on December 4, 1914 in an office of recruitment situated in the 9 of the current rue Alfred Mortier.
If he knew in Nice his most carnal love Lou, he later met in the train from Nice to Nimes, his tenderest love, Madeleine Pagès, who will become after the war a teacher at the secondary school de Calmette in Nice and will live at 8 rue Alfred Mortier, without ever knowing that Guillaume " had enlisted under the most beautiful of heavens in Nice by the Sea with its victorious name… ". He will write for her " Tender as the recollection ". Seriously injured on March 16, 1916, he underwent a trepanation from which he did not really recover On November 9, 1918, weakened, he died, victim of the epidemic of Spanish flu.